What happens in your brain when you experience those “Aha” moments? We may not be there yet, but our recent article on the updating of conscious representations takes us a step in that direction. This fMRI study, led by Elisabeth Stöttinger, grew out of the interest that my collaborator James Danckert and I have in the phenomenon of “updating.” By updating we mean the revision of your model of your environment. We have looked at this in a variety of domains, and now, here, we probe it by functional imaging. In this paper we used the morphing, ambiguous figure data set that we have developed, normed, and made freely available (the details were published in Behavior Research Methods).

Participants reported to us when the morphing images changed from the first one they observed to a second one. Because these image sequences all began from ambiguous figures, participants could not know when, or to what, their representations might change. Using an event related design we were able to determine the cortical areas active at the moment when changes was reported, as well as just before. During change events a network of cortical areas including the anterior insula, parietal, dorsal-medial frontal, and lateral frontal lobes is active. However, even before the change is reported (up to 5 seconds in this protocol) we can still see increased BOLD signal in the dorsal medial frontal region (and a decrease in BOLD in the pre-cuneus). 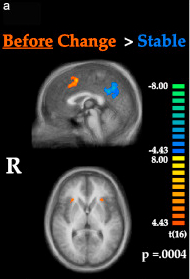 What drives these signal changes exactly? Is it truly the event of a perceptual, representational update? Or are there better alternative accounts? We look forward to your feedback and ideas.